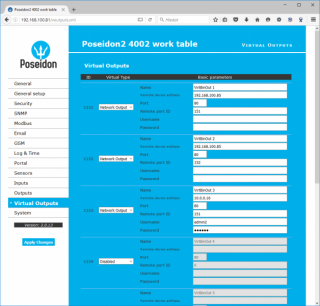 Virtual outputs in Poseidon2 and Damocles2 units allows to use outputs from different Poseidon2 and Damocles2 units (Box2Box). De facto we are talking about similar feature, which was based on SNMP traps, only in case of Virtual outputs the communication runs more reliable way via TCP/IP protocol, it is repeated (done each 60s), secured and all functions work this way too, conditions and features same as with physical outputs.